PTL Chimney Service was founded in 1978 by Gordon Brown, who at the time was an engineer with WBOC TV in Salisbury. Like many who began in the industry at that time, Gordon was inspired by an article he read in Mother Earth News magazine which told how to succeed as a chimney sweep. Fascinated by the prospects of earning a living by cleaning chimneys, Gordon sent away for a kit.

He soon found out that there was more to the business than running a brush up and down a chimney. In those early years, there was no one to turn to for guidance, so Gordon and others who were pioneering the industry in the U.S. had to learn many lessons the hard way. At first, he did a handful of jobs for friends with wood stoves and fireplaces, at no charge. He began to understand the workings of wood stoves, fireplaces and other appliances, and to appreciate the complexity of codes and safety considerations. Gradually he got the hang of it, and in a few years, he was able to leave his engineering post and pursue the chimney business full time.

As a reflection of his Christian faith, Gordon named the business “PTL,” which stands for “Praise the Lord.” In all of his dealings with clients, he strove from the beginning to reflect the ethical precepts of the Bible.

Gordon was among the first sweeps in America to receive professional certification. As the industry grew in its sophistication, guilds sprang up to offer seminars, workshops, annual conferences and other training opportunities. Today, certification of chimney sweeps has become the norm (though it is not required by law), and PTL places an emphasis on making sure its technicians receive all of the training available to them.

Having swept many thousands of chimneys in his career, Gordon retired from active duty upon his 62nd birthday in 1999. Today, with new leadership, PTL continues in the tradition of excellent service that he established, handling all types of appliances and chimneys, as well as many chimney-related repairs.

With thousands of local residents requiring annual chimney maintenance, we at PTL have been honored with the opportunity to develop lasting and valued relationships with our loyal clients. Our goal is to maintain the personal, professional service upon which Gordon built this business.

Our mission is simple — to outperform any other service company that you have ever had in your home. Let us know how we’re doing. 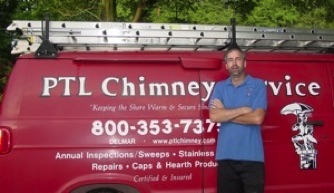